We recently invited donors and charities to take part in a survey about year-end giving trends for 2011. Via this survey, we also sought to gain a better understanding of the impact that the sour economy is having on fundraising. 565 donors and 101 charities completed our survey. Below is a closer look at the results.

First, we wanted to set the stage and understand the importance of year-end giving to the average charity’s bottom line. So, the first question we asked the charities was “what percentage of annual contributions from individuals does your charity receive at year-end (roughly speaking the time from Thanksgiving to New Years)?" The answers literally ranged from 0% to 100%. But on average, these charities receive 41% of their annual contributions in the last few weeks of the year!

And if we probe deeper it appears that online giving, probably due to its convenience, may actually be stronger during the holidays than other types of giving. Specifically, Network for Good reports that >30% of annual giving via their donation processing system occurs during December. Furthermore, 10% of the donations they process annually come in on the last 2 days of the year.

Next, we wanted to learn more about donors’ year-end giving plans and if those plans matched the charity’s expectations. Of the 565 donors that took our survey, 93% donated during the 2010 year-end giving season.  A similar percentage (91%), plan to give this year-end giving season.  Of those that are planning to give this year, 57% of donors expect to give the same amount as last year, 25% will give more, 18% will give less. This matches closely to the charity’s expectations. Specifically, 55% of the charities anticipate that giving this year-end will be about the same as last year-end, 26% anticipate giving will be greater and 16% anticipate that it will be less. In fact, despite the current economic slump, charities are rather confident that they'll meet their year-end giving goals (typified in the charts below). 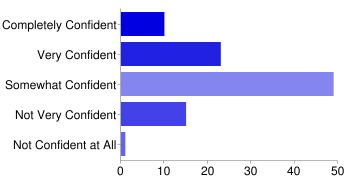 Let’s take a closer look at the 16% of charities that expect to receive less this holiday giving season and the 18% of donors that plan to give less.  The charities attributed the anticipated decline to donors having less or perceiving that they have less to give because of the recession (33%) rather than donors having made unplanned gifts earlier in the year  (such as to Japan, the U.S. tornado victims, the African famine relief efforts).  Likewise, most donors (78%) say that they plan to give less because of their personal finances.

On average, the donors that plan to give less said they'll give about 25% less which amounts to $1,500 on average. The charities were a little more optimistic with their predictions. Those charities that expect giving to be lower this holiday season as compared to last year indicated that it would be down just 14%. And in predicting the dollar value, it ranged from a decline of just $500 to as much as $3 million with the average at $215,000.

Donors were split on how they plan to give less. About half plan to support the same charities, but give each less money. The other half plan to drop some charities off their list so that they can continue to give to the others at the same level they have in the past.

For this study, we also wanted to explore the reasons why people are more motivated to give at the end of the year and whether or not their responses matched what the charities believe to be the motivating factors.


As it turns out, none of the reasons we suggested (tax benefits, receiving an appeal from a charity, the altruistic spirit of the holidays) resonated with the donors. This result is somewhat suspect, especially with regards to the tax benefits (gifts must be made before Jan 1 if donors want to claim them as a charitable deduction for the year). What else could be responsible for Network for Good processing 10% of annual donations in the last two days of the year with a significant spike between Noon and 7pm on December 31st?

Tax Benefits as Motivating Factor for Donors (1 is least motivating, 10 is most motivating)

Receiving an Appeal as Motivating Factor for Donors

Charity Point of View: Receiving an Appeal as Motivating Factor for Donors

Charity Point of View: Religious/ Altruistic Spirit of the Holiday Season as Motivating Factor for Donors

Importance of Various Issues When Selecting a Charity

We asked both the donors and the charities to tell us how important various issues are when a donor is considering which charity to support. We wanted to see if there were in any gaps between what donors said was important and what charities believed their donors find to be important.

We asked donors about the types of charities that they’d be likely to support this holiday giving season. As indicated in the graph below, Human Services (62%) charities came out on top with Arts, Culture, Humanities (27%) charities on the bottom. It seems logical that donors would be more likely to support Human Services charities (food banks, homeless shelters and the like) at year-end when the religious nature of the holiday season reminds us to be thankful for what we have and to remember those who are less fortunate. And it similarly follows that Arts groups would be less likely to be on our mind at this time of the year. Adding to that the recession, which historically speaking has been  a period during which donors redirect their giving away from cultural nonprofits towards those that help the needy, and we can easily understand the responses to this question. 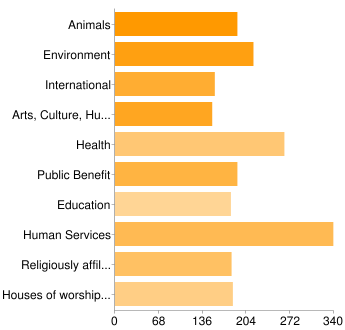 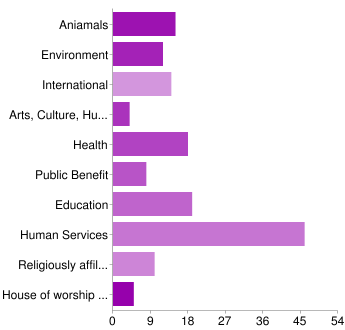