Share
Why isn't this based on more recent data?
Back to Top ▲ 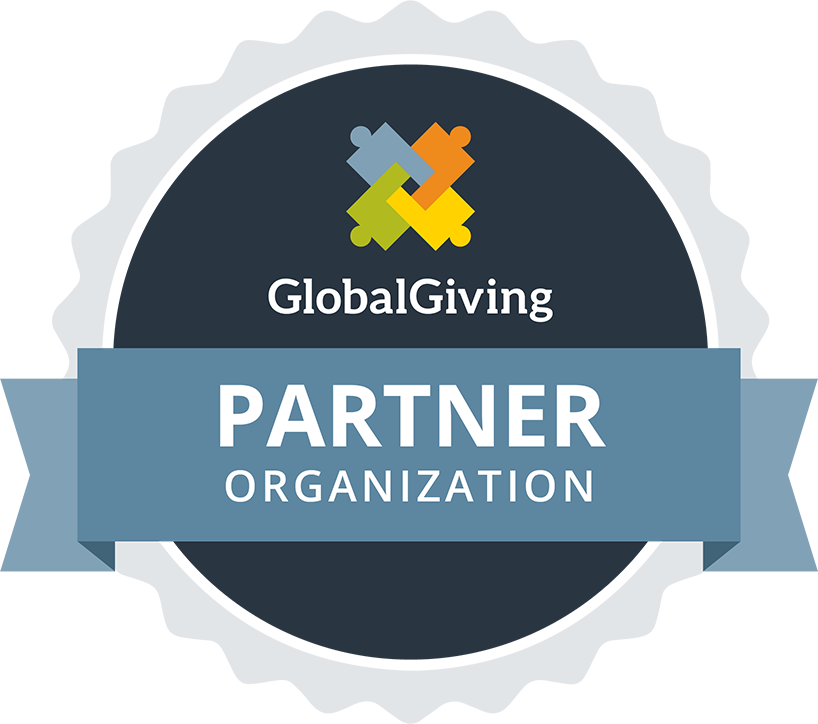 Partner Status
This organization holds GlobalGiving Partner Status. GG Rewards is the system GlobalGiving uses to reward nonprofits that demonstrate listening to the people they serve, learning, and improving their impact. Organizations receive points which translate into their Status: 52% of organizations are Partner, 22% are Leader, and the top 26% of organizations are Superstar. GlobalGiving is a trusted Impact Information partner of Charity Navigator.
Additional Badges from GlobalGiving
Vetted
This organization has been vetted by GlobalGiving.
GlobalGiving is the largest global crowdfunding community connecting nonprofits, donors, and companies in nearly every country. For donors, GlobalGiving provides an additional layer of vetting and due diligence for each of its nonprofit partners every two years, which may include site visit verification. For nonprofits, GlobalGiving works to provide nonprofits access to the tools, training, and support they need to be more effective. GlobalGiving's aim is to drive more donations to more effective, community-led organizations. GG Rewards is the system that GlobalGiving uses to recognize and reward its nonprofit partners for their efforts to learn, improve, and grow their impact. Within the GG Rewards system, organizations receive points for their Effectiveness (commitment to learning) and Engagement (participation on the GlobalGiving community). These points will translate into the GG Rewards Status (Partner, Leader, or Superstar). GlobalGiving's nonprofit partners also receive badges (visible on their Charity Navigator profile) when they are verified by a GlobalGiving site visit, when they have demonstrated exceptional efforts to learn from feedback, improve, and grow their impact, or when they have been named as an exceptional nonprofit through GlobalGiving's Project of the Month program.
Learn more about GG Rewards.
Is this Impact Information useful in your decision making?
There was a problem saving your response. Please try again.
Thank you for your feedback. If you wish to share more about this data you may do so below.
Your feedback has been recorded
There was a problem saving your response. Please try again.
This impact information is current as of August 2020, when it was provided to us by GlobalGiving. At this time, Impact information published on this organization's page has no effect on its rating per our methodology. Further, the availability of GG Rewards information for charities on our site has no effect on Charity Navigator's evaluation of GlobalGiving.
Back to Top ▲

Why isn't this based on more recent data?

The data displayed on this tab is provided by the IRS in the form of Publication 78 and the Business Master File (BMF).

This charity has an official representative registered with Charity Navigator.

We lost a Charity Navigator star. What happened?


But it's always been a little complicated.


Our organization was built on a vision to reinvent charity. We set out not only to bring clean water to every person on the planet, but also to restore public trust by being radically transparent and finding new ways to prove impact.


On Day one, we made a bold promise that 100% of public donations would always bring clean water to people in developing countries. To maintain that promise, we found a separate group (now, about 150 individuals and families from around the world) to fund our overhead costs.


Since then, we’ve treated the two sides of our business differently— with separate purposes, separate fundraising goals, and separate bank accounts for water project funding and operations funding.


And while our Charity Navigator profile has never reflected this unique model, it’s never been a setback for our official rating either. 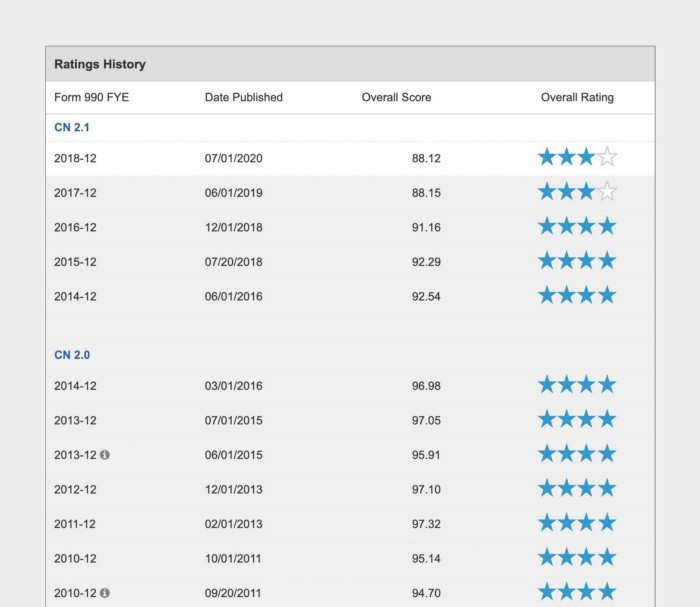 
In fact, even under the new and revised ratings methodology that Charity Navigator introduced in 2016 (called CN 2.1), the “rolled up” or simplified review of our accounts still yielded us their top 4-star rating.


However, as we continue to grow (and increase funding on the Water Project side faster than the Operations side), two of Charity Navigator’s financial capacity metrics now result in scoring penalties for charity: water.


Working Capital is meant to measure how long a charity could sustain its level of spending using net available assets. As you might imagine, it's one of the most important metrics we track.


Charity Navigator believes that financially healthy charities should have at least one year of working capital (i.e. a working capital ratio of 100% or more). We agree. Internally, we actually hold ourselves to an even higher standard, aiming for one to two years of working capital (or 100% to 200%) as you can see in our 2018 Consolidated Financial Statements.


Unfortunately, Charity Navigator's formula is unable to distinguish between how we fund Water Projects and Operations. So even our water project related assets and expenses (which we cannot use for Operations, as per our 100% Model) get aggregated into the calculation. 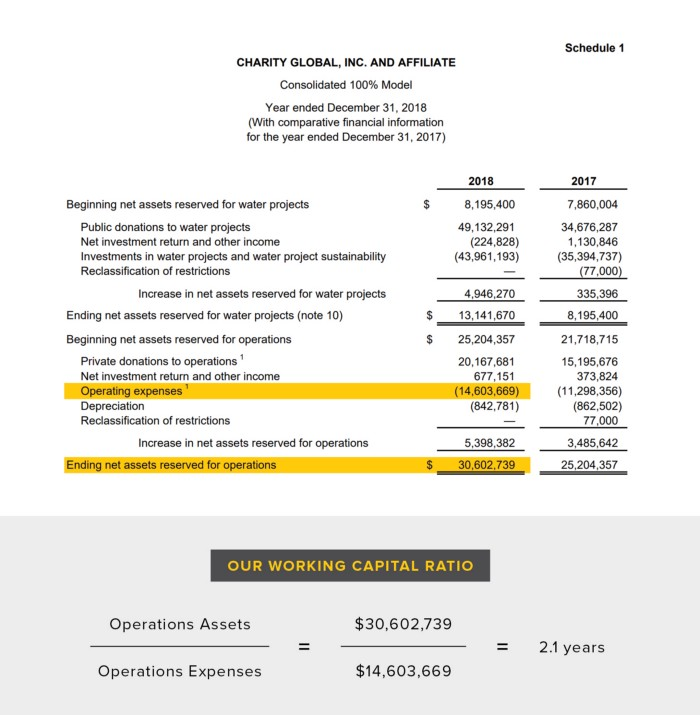 (Page 16 of our 2018 Consolidated Financial Statements)


So while our calculation of our Working Capital ratio for 2018 was 2.1 years, Charity Navigator’s formula sees it as .91 years. And instead of receiving 10 out of 10 for this metric, we received 7.5 out of 10.


Part of Charity Navigator’s purpose in rating the financial performance of charities is to help donors assess the financial capacity and sustainability of a charity. Liabilities to Assets is meant to measure risk and solvency based on what you’re holding and what you owe (similar to a debt ratio). We agree with that intention too!


But again, Charity Navigator’s formula aggregates liabilities and assets for both the Water Project funding and Operations sides of our business. So even the money that we’re responsibly holding as financial commitments to our local partners gets unnecessarily labeled as debt.


This is an important detail: When charity: water signs a grant to implement a year-long project with a local partner, we commit to make disbursements based on certain milestones. From an accounting perspective, these financial commitments to partners are considered money that we “owe” and get recorded as a liability, which—on paper—looks like debt. But in reality, it’s 100% backed by cash that we have in our bank account (as you can see in our 2018 Consolidated Financial Statements here). There is zero risk that we’d default on our commitments because we already have the cash. 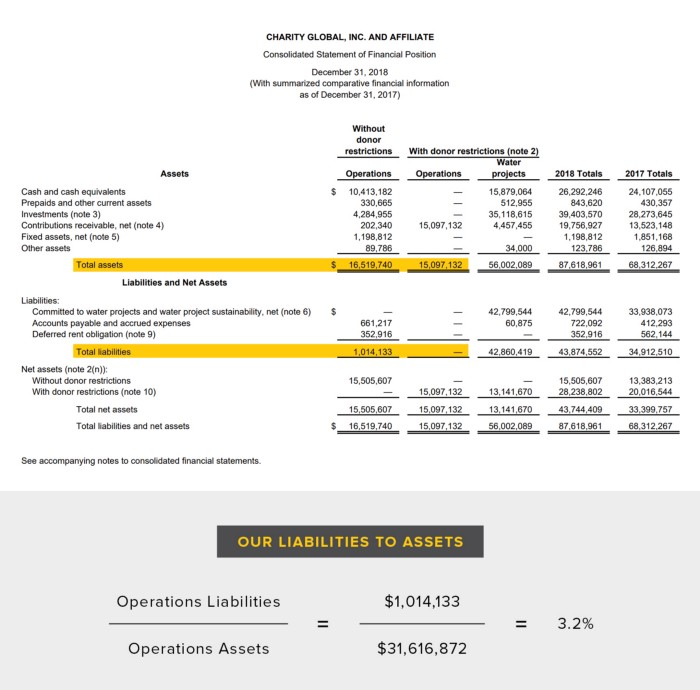 (Page 3 of our 2018 Consolidated Financial Statements)


As we continue to grow, we’ll contract even more projects that give more people clean water. Which means our “liabilities” will also be growing. And since the Charity Navigator algorithm views liabilities as “debt,” they see our growing commitments to water projects as a bad thing.


The reality couldn't be more different.


We agree with Charity Navigator that the financial health of an organization is important. We’ve been in extended conversations with them about our concerns for the past three years, but we’ve been unable to reach a positive resolution.


We also believe that it would be irresponsible to change the way we work for a rating.